We are digging straight down now following the fault line/zone. We are faced with the normal winter problems of draining all the water out as we dig. Cold wet and muddy, much like our summer season this year. However, 5hours solid work today equated to over 300kg of rock and spoil being removed from the new dig. If you look at the recent pictures you will see the rounded shape of both walls in the cave indicating there was once free running water, perhaps a waterfall running over these rounded cave walls. This is all the encouragement we need to keep digging this fascinating fossil cave.

Since the tap was left running into the sink hole it has now swallowed up approximately 37,500 litres of water without any obvious resurgence.

On Wednesday, 1 February 2017 I dye-tested the sink hole with 50 grams of fluorescein (the same amount turned the waterfall chamber green for a week) and that was the last I saw of it.

November was not a good month, lots of injuries, a particularly irritating rock took a dislike to my foot, needless to say my foot came off worse, a totally unprovoked attack, Fraser's knee packed in, too many 20 kilo smuugies (an old football injury).  In November I was happily hammer drilling  away with my beloved Hilti T 50, when I became aware that the air around me had suddenly become poisonous.  3 metres behind me my two 12 volt batteries were on fire!  Short circuit = hasty retreat, but that's the way of it.  Cave exploration is hard on diggers and equipment, so while Fraser, Colin and Hilti got repaired , we assigned ourselves "light duties" and we came up with the following...
SLOW TRICKLE HOLE
Late October a suspicious hole appeared in the NW corner of the main chamber after some really heavy rain.  A small exploratory dig of 0.5 mtr revealed a cavity (approx 2mtr wide by 60cm high) the floor of which is covered in organic, gluttonous material under which may be fossil beach.  However, the roof displayed helictites ,these are tiny stalagtite formations although the jury is still out on how they form but it is mostly thought they will not form without a draught. but what really caught our attention was that this tiny cavity is gently going down.  This was confirmed when I poured ten buckets of water down there (10x3ltr=300ltr) and I do not have a clue where it went!  An idea to a create a small trickle was quickly thought of, a sort of caving technique, pour water down hole until something happens.  To this end a small water pipe from the new dig was dug down a few inches, enough to deliver 1ltr of water every two minutes down slow trickle hole.  The idea is to follow the water.  I opened the "tap" and left it running at 13.oo hrs , 14th Dec.  I will let you know what happens and could this slow trickle hole confirm there is another cave behind main chamber!

HOLE IN THE WALL DIG:  this is the obvious aven, 5mtrs up the wall of the NW corner of the main chamber, yet another dig i started about 25 years ago, and got chased of by well meaning archaeological type persons.  Since September 2012 I found out that I can legally dig here "with a responsible attitude", I just never got round to it, until now.  We have sort of started digging , we had to finish slow trickle entrance first and then find a ladder.  Digging is still exploratory, but it is easy digging so far.
NEW DIG: We got the Hilti working, my foot is better and I think Fraser's knee is ok, so we are back on the job.  Happy Christmas and all the best for 2017.

​This is the amount of material I have removed since I started digging again in October, about 3 tonne.  It is very disappointing as I would have hoped to have ten times this amount by now (see  second photo).  However, my original plan for this exploratory dig inside Smoo main chamber remains the same; to dig in an upward direction, keeping contact with the east wall of Smoo Cave main chamber and the underside of the flow stone until a line of weakness is found, and then dig south-ward (I took a compass in there, the dig direction is ​exactly south) and down-wards.  I have now realised that there is no point in trying to dig in a south-ward direction as the fault line/zone is to tight.  For the next few weeks I am digging downwards only.

I am still around the 17 metre distance.  The dig was getting a bit tight so I have spent the last few weeks making the area where I am presently digging wider.  Digging is a lot easier if you can almost stand up! 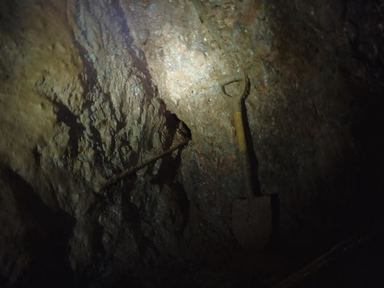 ​I have now reached 16.2 meters, the same distance that can be measured from above the flowstone.  A probe has been inserted into a part of the cave (that I have not yet dug) that is 0.8m long, this being important as it proves that there is more cave than can be seen from the main chamber. However, there has been a lot of heavy rain  lately so there is a lot of water coming through the dig meaning I can no longer use electric power tools (GSG's Hilti TE 5), so I am back to using a small pick.  The material on the left is compacted clay and chert which is really hard to dig through, but not impossible.  On a good day I remove 16 'bucket' loads, that's about four wheel-barrow loads.  To the left of the shovel is the wall of the cave, this is my guide line.  The next two or three meters of this dig are so important and I hope that my guide line leads me in a downwards direction, and through less compact material.

Having acquired a demolision hammer / drill from my caving club (the Grampian Speleological Group), I decided to get Medieval on the dig face which cut through it like butter.  Progress is being made, although my friend and professional geologist Iain Greig had the misfortune of informing me that I may be digging and drilling through a 'fault zone' within the bed-rock.  Having reappraised the situation, he may actually be correct.  This is where the fault line isn't a clean break, but where fault movements have taken place over a wider zone of deformation rather than a 'fault line'. A mere stumbling block, but one which I can hopefully address by changing the angle at which I'm digging, which is the next plan of action...

The latest development is that I have successfully dug along a section of the 'brecciated zone' (where rock and sediment has been crushed and / or cemented).  I am now digging downwards which is revealing a complex section between the two cave walls.  In the picture shown (right), the 'brecciated zone' forms only a thin, minor part of the complex section between the bedrock in the two cave walls.  The remaining section is different and puzzling as the sediment layers appear to be dipping vertically rather than horizontal, possibly because of a boulder or even related to what appears to be a faulted zone?

This is by far the most difficult section of the project so far, largely because of the increasing volume of water entering the dig.  Because I'm now digging downwards from the flowstone ceiling, it means I have to raise any ponding water up to the existing irrigation system which has previously been driven by gravity alone.  All progress though!!!

I have finally reached the rear wall where the fault should be present and it appears to be opening up.  What should be a void seems to be filled with a very hard and cemented breccia deposit however, perhaps from past water flow.  There is more water coming in now which is putting my drainage / irrigation system to the test!

Hello!  To all the people who visited Smoo Cave in 2013 that asked about the new dig. I was promising a big breakthrough by Christmas.  However, the Highland Council, who own Smoo Cave, carried out essential rock-scaling and netting during the month of October. (picture on the left) So, I'm a month behind my expected schedule.

Below are some pictures of how far I am now.  If you can spot the dark line in the middle, that is the wall of the cave. I'm now 11 meters in. I am digging to the right. This is the direction of the cave.

I was visited by Stewart and his mates from the Bristol Exploration Club (BEC) on the 28th of April, who helped me measure the dig then to 13.6 meters. Then I was visited by a larger Mendip migration crew who put up shoring and extended the dig by a meter.

Thanks to the BEC boys. The dig is now 14.6 meters. So there is definitely less than 2 meters to go until I reach the fault line.